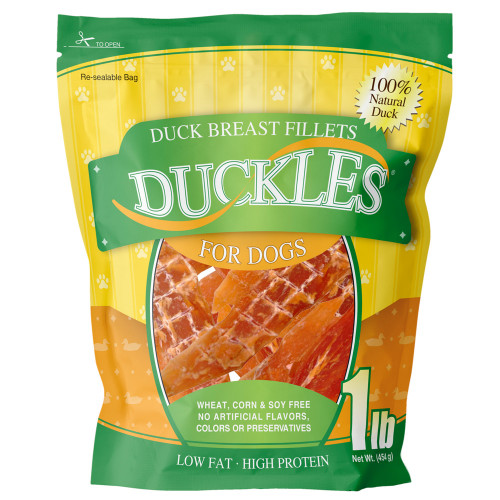 ProsGreat product
ConsExpensive
By Kimbrian24
New York, NY
My dog loves it!
November 5, 2018
I buy duckles in bulk every couple of months, my dog Romeo is a standard poodle who can eat a few duckles each day so I buy a lot. They are safe, healthy and makes my baby happy.

ProsMy dog loves it and they are safe.
ConsA little expensive
By Roxanne
Oregon
Review for 3-PACK Chickles Chicken Breast Fillets for Dogs (3 lb)
September 20, 2018
Well my dogs love them but it's not doing them any good now that they have been back ordered 4 about 5 weeks
By LuckyandMacy
Bergen county , NJ
Made in China
September 12, 2018
Deceptive wording that says "tested" in the USA but they are made in China which makes me uncomfortable. I have given a few to my dogs who like them but I will only use them occasionally.
ProsDogs seem to like them
ConsMade in china
By Mill
CA
Don't Get!
September 10, 2018
These treats were suggested as a replacement for an organic treat that my dog loves (they have been discontinued by the manufacturer in TX). I assumed that since they were recommended they would be of the same quality. THEY ARE NOT. They are very abrasive and hard for the dog to eat, and my dog got very sick for a day after eating them. Maybe it was a coincidence, but that was the only new thing she consumed. Also, just fyi, they are made in China, and arrived just shortly before their expiration date.
By Misty
New York
Dog love them
August 10, 2018
As usual, the dogs cannot get enough of this treats
By onedar
Branford, CT
Great Healthy Treat
August 6, 2018
I have been buying Duckles for quite some time now. My furkids love these. I have one furkid tha is allergic to chicken and other poultry products, but the Duckles have not allergic reaction. He love them and they don't make him itch.
ProsHealthy treat
Consnone
By Missy C.
Cabot Ark
Awesome Treats
June 4, 2018
My dogs love their special jerky treats Chrissy says her prayers befor she eats

By shortsew
Jacksonvile, Fl
Review for Duckles Duck Breast Fillets for Dogs (2 lb)
April 9, 2018
I carry these with me to give to dogs wherever I go. (Can you tell I'm a dog person?) I have never had a dog turn them down.
By Angel M.
Florida
Our little girl just loves them.
February 6, 2018
We buy these duckles because our little girl simply loves them. They make a great bed time treat and she expects to get one when we go to bed so we have to make sure we have a bag or she pouts.
By Mark
Boynton Beach Fl
Just Rattle The Bag
September 17, 2017
Just rattle the bag. That's all I have to do and my two boxers come running for their Duckles. More than a treat, I include Duckles and count it as part of their daily feeding regimen as it is high quality protein. Quite frankly it is now after using this product for the last three years, expected. I get a talking to if I am slow to give them their post meal treat.
By Craig
Missouri
Review for Duckles Duck Breast Fillets for Dogs (2 lb)
August 31, 2017
Great product dogs love them great price
By dragonfly
Swoyersville, PA
Duckles,duckles, & more duckles!!
August 12, 2017
I have reviewed this product many times now because my dog can't live without her daily Duckles treat! We're sure your dog will be crazy about them too!!
By sandy
florida
Review for Duckles Duck Breast Fillets for Dogs (2 lb)
August 10, 2017
Talulah takes a lot of pills and it helps when I hide a piece of the duck in her food. she laps it right up. she loves the duck treats.
By dragonfly
Swoyersville, PA
Wonderful Product & Service
July 28, 2017
I love the swift delivery of products from Entirely Pets--always receive it as promised or sooner!! My dog loves Duckles & it is important that I NEVER run out of her supply!! Keep up the good work, Entirely Pets!!
By Pudgierio2
Picky rescue dog
July 20, 2017
My dog Rio is extremely picky!! These duck breasts she loves!!

By Nativehawaiian
Maui, Hawai'i
Dogs love these
July 14, 2017
My dogs have been eating these treats for awhile now and I have to say that these treats are so moist and soft. I have a 16yr blind and almost toothless chihuahua and he can eats these, and a Jack Russell terrier and they both love their duck treats. Others I have bought other places I had to cut up for my Chihuahua cause it was dry and hard so I recommend this product.
By The O.
New Haven, Connecticut
Love at first sniff
June 29, 2017
My dogs absolutely love these. They never, ever refuse them. They would eat the whole bag if I let them. I have to keep them in snap lock bins because one of my furkids learned out to get into the cardboard box I kept the packages in.. My only regret is that Entirely Pets runs out of stock and with 5 dogs who love these I get protests when they don't have them. They even carry little picket signs (sigh, LOL!)

By Maggie
This is a good product but they did not give me th
June 23, 2017
Was disappointed that they did not give me the memorial day coupon nor the five dollar coupon. This is my first order I don't know if I'll be coming here again because I didn't get what you told me that I would get.
By kitty
florida
Love them
April 17, 2017
I love these for my dogs as they are small enough that I can give them a treat that they love and are healthy. Have bought them more than once and will continue to buy. Best price around for quality, quantity and shipping.
By kitty
wonderful
March 22, 2017
all of my dogs (I have 5) love these treats. They are the right size to give my dogs and they are good for them. Prices are the best.
By Linda
Parkton, MD
Duckles Duck Fillets
March 5, 2017
My dogs and my cat love these jerky treats. The Duckles is the best brand. The treats always seem to be the freshest from them.
By Cease
Northern Colorado
Dogs love this
January 6, 2017
I have 2 dogs and occasionally take care of 2 others, different med & large breeds, and they all absolutely love these.
By donnadee
Bear, DE
Always out of stock
January 6, 2017
I have been buying these items over 3 years and never have I had so much trouble receiving them Now the Chickles and Duckles are always out of stock My dogs love them but may have to purchase somewhere else
By Susan
Lubbock, Texas
BEST TREAT EVER
January 5, 2017
I have a diabetic dog and I give her a treat every time she has to get her insulin shot. I tell her that it's time for her shot of "kisses" and follow it by these tasty treats. I don't think she would take the shot without them. This is why I order 3-2lb bags a month! Some times they are on back order and it scares me that we will run out. So far so good!

By Sunshine
Albright, WV
Special treat
January 5, 2017
My three fur babies love these fillets. I use them as a special treat for them. They average about 3" to 5" long and 1/2 to 1" wide. Just the right size for my doggies who are 18 pounds to 80 pounds.
By Clyde's M.
Sarasota, FL
Best find everrrr!!!!
December 31, 2016
Perfectly-sized, low-fat treat for my diabetic Yorkie, Clyde. Excellent value for the money and, best of all, he loves them!

By snooky
lakeville,mass
want chickle every orning after their walk
December 30, 2016
they both love the chuckle when they see the bag they wag
By MICKI
MY DOG LOVES THESE!
November 9, 2016
VERY HAPPY WITH PRODUCT AND COMPANY'S TESTEMONIAL OF SAFE PRODUCT
By dogs i.
British Columbia
Review for Duckles Duck Breast Fillets for Dogs (1 lb)
October 30, 2016
The cost is excellent and my dogs love the duck.. Also the doggies are great.

By cocker m.
Dogs love these
October 28, 2016
My dogs love these. They look great and I feed them as a snack.
By d1nonly
Absolute Fave of all our Dogs
October 27, 2016
these are nice size, like a slice of chicken breast that was dried. They are not made from chopped, formed then pressed mystery meat (those are usually soft) These are hard. My dogs absolutely love them and will almost do back-flips for them. we have a chihuahua mix, two lab-chow, and a pit bull. They are totally crazy and go into a tizzy the moment they see the bag. The first time I ordered, I only ordered 6 pounds...that was a mistake, because then they were out for several months. As soon as they became available, I bought 60 pounds. I also bought Duckles, but those strips are very narrow and the three larger dogs down them in a split second.
Page 1 of 4
1
2
3
4