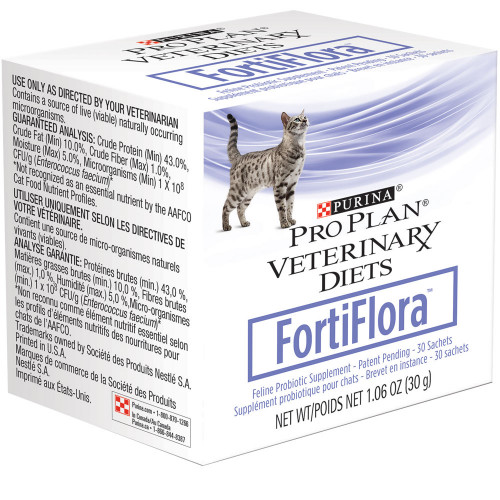 4.8
175 Reviews
5
85% (149)
4
14% (25)
3
0% (0)
2
0% (0)
1
1% (1)
96% Recommend this product (168 of 175 responses)
By Dusty
Review for FortiFlora FELINE - Box of 30 (1 gram packets)
February 15, 2013
Trying this product on my cat who has chronic intestinal issues. Gave a whole packet in some canned food the first time...not a good thing...too much flora for my cat. Have been adding this slowly to "Baby's" food 3 times a day. She's starting to put on a little weight but still has stool problems so far. I am hopeful that over time this product will help this situation.
By Tina
Central Point , Oregon
Great product - great service
January 28, 2013
Forti Flora helps my kitty with her digestive issues as it did my previous kitty. Entirely pets get it here fast and I so appreciate their service.
By Roz
West Fargo, ND
Third review for an awesome product!!
January 27, 2013
You may have seen my former 5-star reviews on this product. Our two rescued cats were adopted 9 years ago, along with giardia and clostridium overgrowth. The first causes puddle-like stinky stools; the second causes soft stools with mucous and blood. Every time there was a flare-up, our vet prescribed Flagyll twice a day for one week. It is the most bitter tasting med that most cats, including ours, detest!!! About 2 years ago I decided to treat them with FortiFlora, and I have not had to put them on a med since! Whenever there is a flare-up, I give one full pack twice a day mixed with about a tablespoon of water, and they LOVE it!! The intestinal problems clear up completely! After that I return to one-half pack twice a day for each cat. This way it is always in their system. I am reviewing once again because our Gabe left a puddle in his box yesterday morning, and tonight his stool was back to normal! :)
By Josephine
Naples, Florida
This product works
January 23, 2013
My cat needs to be on a long course of antibiotics, but the vet said he must stop if he gets diarrhea. I bought a box of this from my vet and it worked great mixed with wet food. I had to start with only half a packet till my cat got used to the taste. When I needed another box I bought it here because it was much cheaper then what my vet was charging.
By tgibson
Northglenn, Co
Pet Pro-biotics
January 9, 2013
Good product for giving a pet the pro-biotics they need. Their needs are different from humans and can easily be addressed by sprinkling this powder on their food. Have not had a problem with the taste, I even mix it with my raw food diet.
By GatsMack
Chicago, IL
Definitely Helped A Lot
January 8, 2013
I would've given this 5 stars but, I think that the positive outcome my 12 year old cat received who's had an undiagnosed gastrointestinal problem for over a year, is a combination of this fine product and changing his dry food from prescription Science Diet I/D to Natural Choice Indoor Mature (Senior). All in all I think it helps him a lot and he's only been on it for about 2 months. I forgot to mention it firmed up his bowel movements and reduced the odor.
By Kitty m.
Recommended by the vet
January 4, 2013
The vet recommended fortiflora for my cat with intestinal lymphoma. She is finicky and will eat this product on her food.
By Monty
Review for FortiFlora FELINE - Box of 30 (1 gram packets)
December 29, 2012
I'm glad there is a kitty probiotic and it's a much better price than at the vet
By qwertyz12
Columbia, MD
It's worth a try
December 26, 2012
A number of Vets recommended this to try to improve my kitty's really soft stool. Unfortunately, it doesn't seem to help him. But further investigation turned up some thyroid problems, so we'll see what else will help. He does eat it just fine mixed in with his food. And service from Entirely Pets was great - quick delivery.
By larrypizza
commerce,ga.
it works
December 17, 2012
my cat was having trouble with a soft and runny stool. We gave him this product with a can of cat food, and after a week he started to have a regular bowel movement.
By SHY
AN IMPORTANT PRODUCT FOR OUR ENVIRONMENT!
December 17, 2012
We live on a small farm... for some reason that lends all my four legged friends the opportunity to explore and eat things that would not be part of a normal environment. They eat weeds, gophers, dead birds, mice anything that has met an untimely death!! Just because things are ingested does not mean their stomachs are welcoming such items. Upset stomachs are the norm, and this FortiFlora FELINE has been a life saver.. keeping tummies settled and helping to recoup what was once balanced.. a must for the hunters in our home!
By Yvonne
Excellent Product. Worked like a charm
December 9, 2012
Very pleased with the product and the prompt delivery.
By sandi
south carolina
A+ product
November 6, 2012
great for upset tummies. I use it to sprinkle lightly on canned food for any cat who needs encouragement to eat a prescription food. it works like a charm. one envelope can be used if sprinkled lightly over food for at least four meals.

By Bob
Great for my cat
November 6, 2012
I sprinkle one packet of FortiFlora on my cat's wet food daily. Have been doing this for several years and it maintains a healthy digestive system and no wet stool.
By catisboss
excellent product
October 28, 2012
works wonderful to entice cat to eat boring prescription food and for other cat who prefers to hunt
By socalstoker
San Diego, CA
Like magic
October 23, 2012
Someone gave me a few packets of this to try when a cat had bad diarrhea due to antibiotics, and it cleared up almost immediately. When she again developed moderate runs out of the blue a few months later, I started putting it in her food for a few days, and again, the problem cleared up. I wouldn't be without it. Very effective.
By Liz
FortiFlora Feline
October 22, 2012
My kitty is a super picky eater...she has to take some meds occasionally...and not only does this product straighten out her stomach if an issue..but she loves the flavor...and that is a miracle
By Hennie
FortiFlora
August 20, 2012
I was delighted when I found your website and was able to purchase FortiFlora on line. The medication was delivered promptly and I was very happy with your services. I will definitely tell my friends about your website. Thank you so much for the opportunity to get the medication necessary for my "feline" family and also to save some money.
By yadi
Orlando,Fl
excellent product
August 19, 2012
I have been using fortiflora for 2 years and i have seeing great results in my cat. She is more energetic, happy, and her coat is soft and shiny.
By Monty
worried about proper shipping
August 19, 2012
I like the product and the price was great, my concern is that although it does not have to be refrigerated, the product should be kept cool in transit--which is was not. I'm afraid it may have been compromised--there are live active cultures among the ingredients--hope they are still alive! I will call next time to ask that a cool pack be included...
By MaryJr88
Vet recommended
August 7, 2012
My vet recommended this product for my older cat that has some GI upset. He really likes it mixed with his canned cat food. It is too early yet to tell if it will help his GI problems, but I am optimistic since he likes the taste.
By Neubber's M.
Bath Pa
Neubber loves this stuff
August 7, 2012
Our cat loves this stuff. It's like a treat to him. He stares at the box until I add it to his food and then gobbles it up