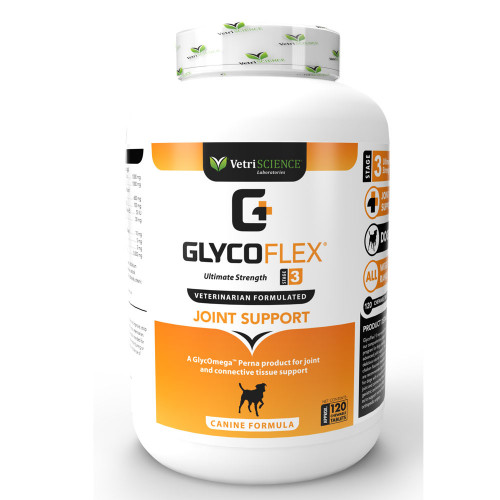 By Wolfpup's m.
IL
Great ingrdients
January 16, 2014
This product is great ingredient-wise. My only complaint is that each tablet is very large and poorly scored, so breaking them apart is difficult. This manufacturer DOES make a soft-chew version, but they contain maltodextrin, a corn product, which I avoid giving my dog. Thus I'm stuck trying to break apart these tablets.
By Jo
Highly recommended!
December 13, 2013
My 10+ year old Lhaso mix is doing so well on this supplement! He is on carprofen as well, but I think he could not do without the Glyco-Flex. It has made the difference between leaving him home when I take my other dog hiking and having him enjoy going along. One of my friends is calling him "mighty dog"..... And he is!! Thank you!
By Crysti
Ontario
Feelin good
December 4, 2013
My boy has HD in both hips and has been stiff getting up and then is fine. Since being on Glyco Flex III he is now getting up with ease and feeling good. His overall movement is much better as well.
By ebulldoglover
Vermont
Awesome Product
December 1, 2013
There are few products that I have tried for my dogs that actually perform better than they are supposed to. This is one of them. I have owned English Bulldogs for 14 years, and now operate a rescue for the breed. Several years ago my vet recomended this product for a rescue dog with hip dysplasia. He was already pain symptomatic so I had my doubts, especially when I saw the cost. Well, within two weeks on the loading dose this guy was going up and down stairs easily with no other changes in diet or medical treatment. I knew I had to keep him on it, but not at $120.00 a bottle. I found Entirely Pets and have purchased from them since. I use this on every dog that I rescue and send every adoptee home with a bottle. It is amazing. I will use it until they stop making it.

By Stiffoldlab
It Seems to Help
November 13, 2013
Glyco-Flex III seems to have helped our 14 year old lab be a little less stiff.
By Ellen
Raleigh, NC
Gyco-Flex III
November 1, 2013
Our Rotwieldter is 10 years old with a deterioratilng hip joint.....this product is adding some quality time to her life and letting us keep our family member a little longer.

By newfypete
Chester, Nova Scotia, canada
The best product of its type
October 20, 2013
I have a 5 year old Newf with hip dysplasia who has been on Glycoflex III since she was 6 months old. I feel that it has moderated her symptoms and that it would be an excellent product for all dogs. EnrirelyPets price is by far the best.

By Doc3
Good Stuff
October 6, 2013
My Vet recommended it and I have been using it for three years with both of my Airedales (Happy 10 years old and Missy 13 years old). They both have responded well to it and, outside of some minor joint soreness commonly found in senior dogs, they are doing great. I have recommended it to others who have senior dogs and they have adopted it as part of their feeding program with similar results.
By Bob
Bremerton, Washington
Really works!
September 26, 2013
I recently met "Sunni" who is a final-refuge stray from the streets of Tacoma. Placed by Old Dog Haven, she came to me with obvious signs of arthritis and an uncomfortable gait. ODH supplies the medications for their foster dogs, and in the two months "Sunni" has been with me, she has shown marked improvement in her gait and apparent comfort. I now provide these tablets to my other dog of similar age, as a prophylactic measure. And they BOTH take them without peanut butter!

By Corgirescuemom
Fort Wayne IN
Great product for ancient dogs
September 23, 2013
We have used this for quite a long time; when I have tried to wean our two old dogs off it, I notice their difficulty in getting up from the floor or up steps immediately. Our vet first recommended it, and we will never be without it now.
By Mark
Bridport, VT
Good Stuff for Old Dogs
August 20, 2013
Have used other similar products years ago, but this product is the best. Dogs love the taste, easy to break apart if you need "half's", and the product WORKS on the older dogs. They respond very quickly, being more lively and moving freely with much less pain. Also recommended by all of our Vets!
By Sadie
Moneta, Va
Good stuff
August 3, 2013
My lab has torn his ACL in both knees and our vet recommended this product before and after surgery. The surgery went well and with time and this product he is doing very well.
By Ct
Pittsburgh, PA
Changed my dogs life
August 2, 2013
This is the best product for joint pain. I have a chocolate lab whos knee was totally reconstructed at 9months old. She is now 10years old. She takes this once a day. Without it she wouldn't be able to walk. Her orthopedic surgeon recommended it and its by far the best product for her. 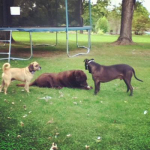 By barb
best product i have given the boys
August 2, 2013
ihave a cavelier that has a bad leg and a golden that is getting up there in years vet recommended this product used it and works great with the boys I can see the difference in the cavelier and his leg I will keep using this product and this website has the best price for the product and is great to deal with I will be returning to this site when I need product for the boys BARB :)
By B B.
Western NC Mountains
Better than expected
August 1, 2013
My 11 year old Black Lab has arthritis and hip issues. Tried Previcox and it worked wonders, however I started seeing reactions that were not good, such as labored breathing. I wanted to try something less risky, so I ordered the Glyco Flex 3 . He would not put his right rear leg down before this medicine. After a few days, he began to use his leg again. As long as he gets his full dose daily, he is much better. Not perfect, but better.
By Travis
New York, NY
Great product
July 27, 2013
I started giving this to my Lab who was 10 years old when he started having trouble getting up. On his trip to the vet when he was 11, The vet was surprised was doing so well. We really thought we had only a year left with him. He is now 12 and still getting around. This product really does work..

By trainman
Southern Illinois
Review for GlycoFlex 3 (120 Tablets)
October 24, 2012
Excellent price on a good product. Our dog was having difficulty working (stiff, gimpy). These pills worked within the first week!
By Beth C.
Milford, NJ
Wonderful Product
October 22, 2012
I've been giving this product to my 12 year old Yellow Lab for about 8 years and it's helped her tremendously with her severe hip dysplasia. I don't think she'd be able to get around as well as she does without it!
By Jan
Great Product
October 22, 2012
I recently purchased Glyco-Flex III for my 12-year old Corgi. In about three weeks' time, I can really see an improvement. He was on Glyco-Flex II for several years prior and I noticed it just wasn't doing the trick for him. Cully likes the tablets; they are a real treat for him. I notice a big difference when I forget to give him his "treat."
Page 2 of 4
1
2
3
4
CALL IN YOUR ORDER 800.889.8967