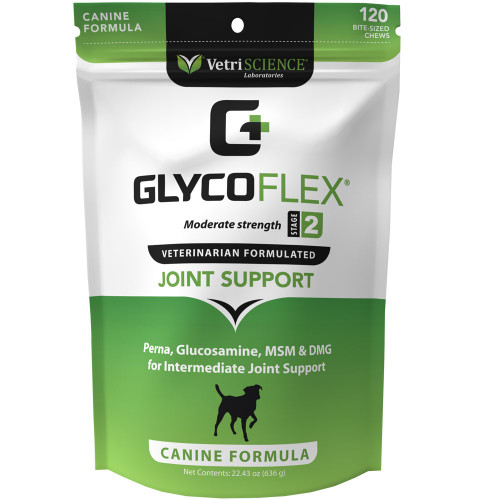 By Ladybugg
Best Product at Best Price
August 22, 2015
This is what my vet always recommends and Entirely Pets always has the best price!
By Robin
Philadelphia, PA
Glyco Flex II (120 Bite-Sized Chews)
July 23, 2015
My little Schnauzer is moving better and likes the taste too.
By Dominoe K.
Hutto TX
First time using the chews
July 13, 2014
We have been using Glyco-Flex II for a long time in tablet form, our present Shepherd got so she just wouldn't take them so we decided to try the chews she seems to like them OK, they do a good job as far as we can tell, this product was recommended by one of our Vets.
By debbie
Kane, PA
glyco flex ii
July 9, 2014
dogs love them and help with activity. this is the second dog I used them for.
By Sandi
Good results
June 24, 2014
Though we haven't finished the entire 120 ct. bag as yet, I am happy with what I am seeing... Much better movement after his back injury. My 11 year old Basset runs for his Glyco-Flex chew. He thinks it is a treat!
By PJ
she can jump again
June 23, 2014
My six year old female westie suddenly stopped jumping up on the couch, and we had been lifting her up onto it. Within thee weeks of starting the Glycoflex II bite size chews once a day, she now jumps up by herself. That is certainly not a placebo effect! Now she acts like the dog she was when we adopted her at age three!

By Dog M.
CA
Good Results
April 15, 2014
I have used this product when my dog had a lame paw. It was fantastic. Most recently one of my dogs seems to have allergic reaction to it so I may not be able to give it to him but I will for the other 3
By Doggielady
Maineville, ohio
Great way to get them to take, like a treat
February 20, 2014
My vet recommended and I saw that my golden was having trouble jumping and running. We started with the 2's and the vet said will have to wait and see if he needs the 3's. He is doing better.
By mama b.
healthy treat
February 20, 2014
our cats are getting older now and this helps with the joint problems.
By Rich
Retired racers' best friend.
December 30, 2013
I have owned Greyhounds for the past 40 years. Most of them were racers who, due to injuries, had been retired early. My present Greyhound (Mr. Bones) had a soft tissue injury to his right shoulder and was forced into early retirement. A couple months of Glyco Flex II and he is now sound and the fastest dog at the local dog park. All credit to Glyco Flex. It's a great product and I highly recommend it without reservation.
By norfolk v.
Disappointing Purchase
July 10, 2013
Chews are very dry leading me to the conclusion that they are not fresh. Not worth saving money if your products are old. Guess I will have to pay more and get them from my Vet.
By jko
princeton, nj
worth buying
June 13, 2013
they seem to be helping my lab with her knees
By Cheryl
Buffalo, NU
Tasty healthy treat
April 29, 2013
My dog and cat love the Glyco Flex II chews, they think they're treats.
By Fastlane14
great product
April 21, 2013
GlycoFlex II is a high quality product. Our dog eats his daily dosage like it's a treat and I believe they have given him better movement in his back legs. I would recommend these!
By naomee
New York
Wonderful Product
February 2, 2013
These were recommended to me by my vet .... We have a mini labradoodle who has had joint leg problems....including an expensive surgery .... I cannot believe the difference these Glyco Flex Chews make.. It's so obvious... I
By Nita
Olive Branch, MS
Works great
January 23, 2013
My dog loves the taste of this product and it keeps him running and playing without pain.
By Lori
Buford Ga
Good product
January 1, 2013
Makes a difference with my dog. He is much stiffer when not taking these.
By Bella
Florida
Love these chews! Great product!
December 14, 2012
We have been giving Glyco Flex II to our dog, Bella, since she was 6 months old. She had patella luxation in both rear knees. Bella is now 14 years old and her last wellness x-ray showed no signs of arthritis. This product was recommended by the orthopedic surgeon that performed her surgery. She is a Toy Manchester Terrier, only 12 pounds so we give her one chew daily. She loves them. We original gave her the tablets but changed to the chews when they came out.

By cassdy's m.
every purchase at great price and speedy delivery
December 13, 2012
this website does the best ever on price and delivery.
By Jill
denver, CO
Great Product
December 4, 2012
I have been using this product with my border collie who has been going through physical therapy for a shoulder injury. The vet recommended I try it. Combined with proper excersize, pt, and GlycoFlex II, she has been steadily improving. Now I also give this product to the corgi, as they have very long backs.
By ljdiamond
Dallas, TX
Love packaging
November 25, 2012
My dog loves the chews and I love the packaging which keeps the chews soft until the last one is gone.