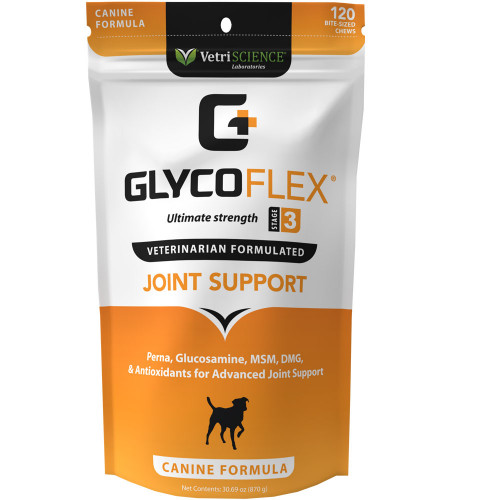 4.8
270 Reviews
5
87% (234)
4
9% (24)
3
2% (5)
2
1% (4)
1
1% (3)
95% Recommend this product (257 of 270 responses)
By Mickey
Chicago, IL
Surgeon recommended
August 14, 2012
After my Chow had a CCL operation, the surgeon recommended keeping him on Glyco Flex. He's been on it for several years now and keeps moving well despite that surgery and luxating patella surgery.
By ricki
Quakertown,Pa
great product
August 12, 2012
My girlfriend told me about this product when my Lab hurt her leg, it worked really good and she is running around like her old ( 8 ) self again. I still give her one a day to maintain her health.
By JimNYC
New York, NY
Soft, Chewy and Tasty Supplement
August 3, 2012
My dog just gobbles these up. We have tried a number of other brands and types, but these are the only ones my chihuahua will eat. They are the perfect supplement if your dog is experiencing any joint problems. Within 3 weeks my 6 year old dog went from sulking and limping to playing and running. These coupled with heat laser treatments have given him a second puppy life.These are the best.
By jmh
Review for GlycoFlex 3 Canine (120 Soft Chews)
July 30, 2012
Very reasonable price compared to other sites. Looking forward to the future results for my pets.
By Elaine
Good price!
July 24, 2012
Price was quite good, easy to put with meals, good product
By Zoey
Georgiat
Exactly the Same that the vet sold!
July 12, 2012
But almost half the price. Thank you for offering us an affordable alternative. Our dog loves those things and they do actually help her with her luxating patella's.
By Muddyjeep4x4
Shillington, Pennsylvania
Review for GlycoFlex 3 Canine (120 Soft Chews)
July 4, 2012
Sydney just loves these chews. Its a treat and its good for him.